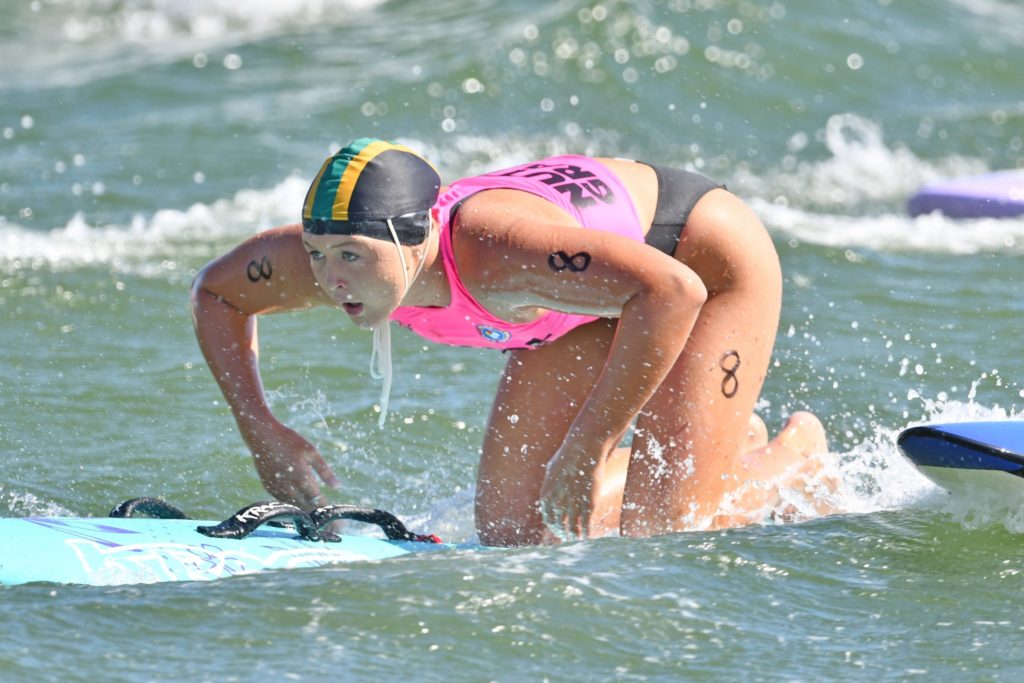 of a fellow competitor during the Ironwoman Series trial in Kingscliff yesterday.

Twenty-four year-old Ella Brown from Maroochydore demonstrated how “rescue ready” the Ironwomen and Ironmen are, stopping mid-race when she saw fellow competitor Lilly O’Sullivan help (Burleigh Heads Mowbray Park) floating on her back in the swim leg of the final Ironwoman race of the day.

“It was in the first swim of the M-shape and I was about 5-10m away from the first can when I noticed a swimmer floating off to the left-hand side,” said Brown.

“I turned the can and looked and saw the competitor (O’Sullivan) floating on her back and I yelled out ‘are you ok’ and I got no response, so I immediately went and put my arms underneath her to keep her head above water and signalled for help to the nearby water safety IRB crew.

“I went with Lily in the IRB back to the beach and thankfully she came around before we got back in and I just reassured her that she would be ok”.

When questioned about the decision to abandon her own chances in the Nutri-Grain IronWoman Series, Brown said it didn’t even require a decision.

“Lily’s safety was far important that any race or result, I didn’t think twice,” said Brown. “We are lifesavers and when needed that is what we do and I would hope that someone else would do the same for me if ever I was in a similar situation,” added Brown.

“Ella Brown’s actions today epitomise everything our sport and movement is about,” said Druery.

“Ella sacrificed her own race to help a fellow competitor in the true spirit of what surf lifesaving is about, she is an outstanding role model and deserves to be acknowledged.

“Our athletes are all qualified surf lifesavers, and this is what makes our sport unique. Ella’s action followed by the response of our water safety personnel ensured Lily’s safety.

“Lily sustained a kick in the head during the swim leg and Ella’s efforts, combined with the quick action from our water safety in the IRB crew is to be applauded.

“Once back on the beach Lily was seen by the first aid and medial officers and was thankfully fine and able to go home”.

For O’Sullivan, this was her first attempt for the Nutri-Grain IronWoman Series and was extremely grateful for the decision and action of Brown and the medical support crew.

“All I remember is getting near the first can with the lead girls in my swim and feeling a pain in my head and the next thing I remember is being in the IRB and Ella telling me that I was going to be okay,” said O’Sullivan.

“I really hate to think what might of happened if Ella didn’t stop, I can’t thank her enough. I am disappointed that it ended my race, but it makes me hungrier to get back out there and aim for next year’s series”.