There has been a fair tradition of boat rowing in the Lakes club since its inception with crews over the years traveling across the state and indeed interstate to represent the club in some pretty tough competition and rowing conditions. In recent times, namely over the past decade or so, the club has enjoyed the support of Mr Harry Rijs personally in the boat area of the club as well as Mrs Marlene Rijs supporting a donation towards the purchase of the four wheel drive and Patties foods in a corporate manner with there support of many fund raising events, bronze camps and our State Titles in 2010 & 2011.

Harry got behind the Master's boat crew in 2001 with the purchase of a second hand boat from Fairhaven. The boats crew at that time was Ian Shepherd, Murray Colvin, Bruce Woodward, Stephen Campisi and Ron Stott. The boat was reconditioned by Stephen and myself and painted blue by Paul King who at the time worked at Lakes Smash repairs and was done at no cost to the club. The crew rowed extremely well at the Australian Titles for two years, finishing in the top eight crews in the country. Not a bad effort with a heavy second hand boat! Harry also paid for a new set of L2 super light oars from Croker in 2003.

It was agreed with Harry at that time, if the club ever won a National gold medal, then he would commit to the purchase of a new boat for the club.

In 2008/09 the Masters Men (Hungries) and the Women's Masters Crew (Mad Mothers) were formed and serious training over a period of eighteen months was programmed and executed towards winning a medal at the World Masters Games. It was found that the Patties boat was in poor shape and too heavy for the women's crew to lift and load onto the trailer after training. The Committee agreed that it was indeed an OH&S issue. I spotted a good second hand boat at Tacking Point Surf Club in NSW that would solve the problem.
Doc McKenzie approached Harry and he was only too pleased to assist, putting forward the purchase price and a bit more personally. The club purchased a new set of oars and row-locks for this boat and with fund raising by the boat crews and was almost cost neutral to the club.

Once we had the boat back from NSW, Doc and the crews cleaned up the hull and prepared it to be sent to Rob Ashworth (shipwrights) at Paynesville for some fiberglass repairs and repainting of the hull with Jotun 2 pack finish. This was done at no cost to the club by Rob and his son David over a six day period, taking a lot longer than he had anticipated, and this proved to be expensive for him; He did not complain however! Signage of the boat in the Four n Twenty livery was at no cost to the club by Craig at Sign Line in Bairnsdale. Craig is Bob Dykes son. Bob is a member of the Thunderbirds Hot Rods who regularly assists our club, greatly, in raising funds.

Once finished the boat was taken around to Patties where Harry got his first glimpse of the finished product. He was rapt! The result of that combined effort is now in the record books worldwide, Gold Medal 160+ Female surf-boat World Master's Games Champions Manly Beach October 2009.

Not a bad effort for a little country club like Lakes Entrance who are the current holder of the prestigious honour of being the Australian Club of the Year!

Of course Harry being true to his word, after a visit from myself in late May to his office, has come forth with the bulk of the funds to purchase a new boat. Surf boats are expensive items and clubs who row boats always have trouble getting sponsors on a regular basis. We have in our club, arguably the biggest supporters of this club in its history, the Rijs family and Patties Foods. I have personally thanked Harry and his staff at Patties Foods for this incredible support of our club.

The new boat has been ordered from DKG at Burleigh Heads in QLD and should be ready very late November or early December for pick up. It will be the same colours as the existing boat but with larger sign writing on the hull.

As a club this boat will be competitive for a decade, so if you are interested in rowing or learning how to sweep contact me anytime. 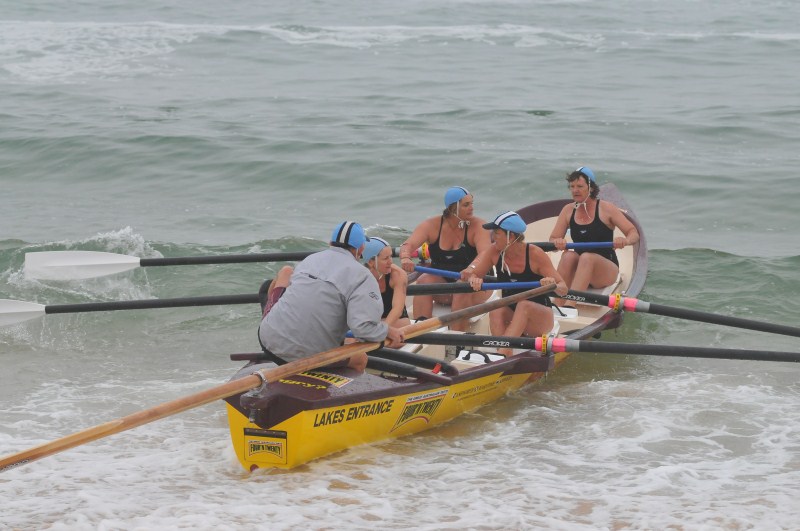