great volunteers we are fortunate enough to have within our movement.

As the largest volunteer organisationin Australia, Surf Life Saving encompasses over 176,000 members from 315different clubs around the country, who volunteer over 1.3 million hours tokeeping the Australian coastline safe.

We begin the show with the SLSAPresident President, Graham Ford AM about how he became involved in Surf lifeSaving and why volunteering is so special to him and his family.

“We’ve got five children, four girls and a boy and we took them down to the Bronte Nippers because we wanted them to be able to be competent in the water”.

We also catch-up with AlbatrossNippers founder and Australian of the Year Queensland local hero Nick Marshall,from Nobby’s Beach SLSC about his involvement in Surf Life Saving and theintroduction of a Nippers program for children with special needs.

“We’re not a standalone day, we’re nota special needs day at the beach, we are inclusive Nippers,” said Marshall.

“My ultimate goals is that there’s nolonger an ‘Albatross’ group, it’s not called Albatross, it’s just those kidsstarting to assimilate into their age groups, and with a little bit of extraattention they can progress through Nippers like their peers.”

Next, we fly to the Westpac Life SaverRescue Helicopter base in Sydney to catch-up with the crew who recentlyperformed a rescue, saving two men from a sinking boat off the coast of CurlCurl, NSW.

“We arrived on scene and pretty muchstraight away we located the vessel with one person clinging on to the top ofthe boat waving around his life jacket and another one in the water holding on toan esky,” Sorrell said of the Westpac Life Saver Rescue Helicopter locating theoverturned boat.

“We winched down and first picked upthe person holding on to the esky…and we winched back down and grabbed theother person off the top of the boat.”

“Theactual boat sank straight after we got the second patient in, and a few minuteslater that boat sank… if that had of happened before we got there, it would’vebeen a lot harder to find these guys,” added Senior Crew member Cracknell.

Andfinally, we take a trip to Fairhaven SLSC in Victoria to chat to Club CaptainMichael Henderson about his passion for the movement, leadership and theimportant role volunteers play in the community.

“We are all there to achieve one goal in surflifesaving and that is that everyone who goes out for a swim comes backsafely,” said Henderson.

“When you have a group of people with you at thebeach, wearing the red and yellow that have that same common goal in mind, itis a critical thing for the community, the club and it is enormously rewarding”.

Tofind out more about each of these stories make sure to tune into episode two ofSurf Studio this Friday night on the SLSA website and SLSA Facebook page.

Surf Studio is regular online show with each episodefeaturing stories from around Australia and covering a range of topicssuch as sport, lifesaving, leadership, education etc and Surf Life SavingAustralia encourages everyone to be involved. If you, or anyone you know has a story that you wouldlike to share via Surf Studio please email surfstudio@slsa.asn.au 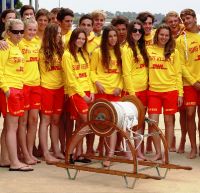